"Once upon a time, there was a village surrounded by mountains and valleys. One day, the village chief became ill with serious diarrhoea. The people gathered around the chief's house to discuss what to do. But no one knew what to do. Then suddenly, an old woman entered and said "I know which herb can cure the Chief." She took some herbs out and said, "Forest tea leaves can cure diarrhoea."

She started to prepare the medicine with these leaves and gave some to the Chief. Three days later, the village chief became well again.

The old woman told the thankful villagers, "Everyone can learn how to make simple herbal treatments. It's part of our ancestors' wisdom." The villagers started learning about herbs and preserving their traditional Knowledge. Later, the entire village held a festival to celebrate the Chief's health.”

As part of Green Mind, we have been conducting various activities including sustainable Projects on many issues of deep concern such as Environmental Protection & Conservation, Biodiversity Conservation, Energy Conservation, Climate Change, Sustainable Development, and Impact of Environment on the Health of People etc.

With every programme and function conducted, the family of DEEKSHA has been expanding. Till date we have visited/conducted various programmes for around 4700 educational institutions, engaged in productive interaction with over 47,000 educationists in varied forums, rubbed our shoulders with over 16 Lakh students, planted around One Lakh Thirty Five Thousand Six Hundred saplings – all these spread over 14 States/Union Territories. 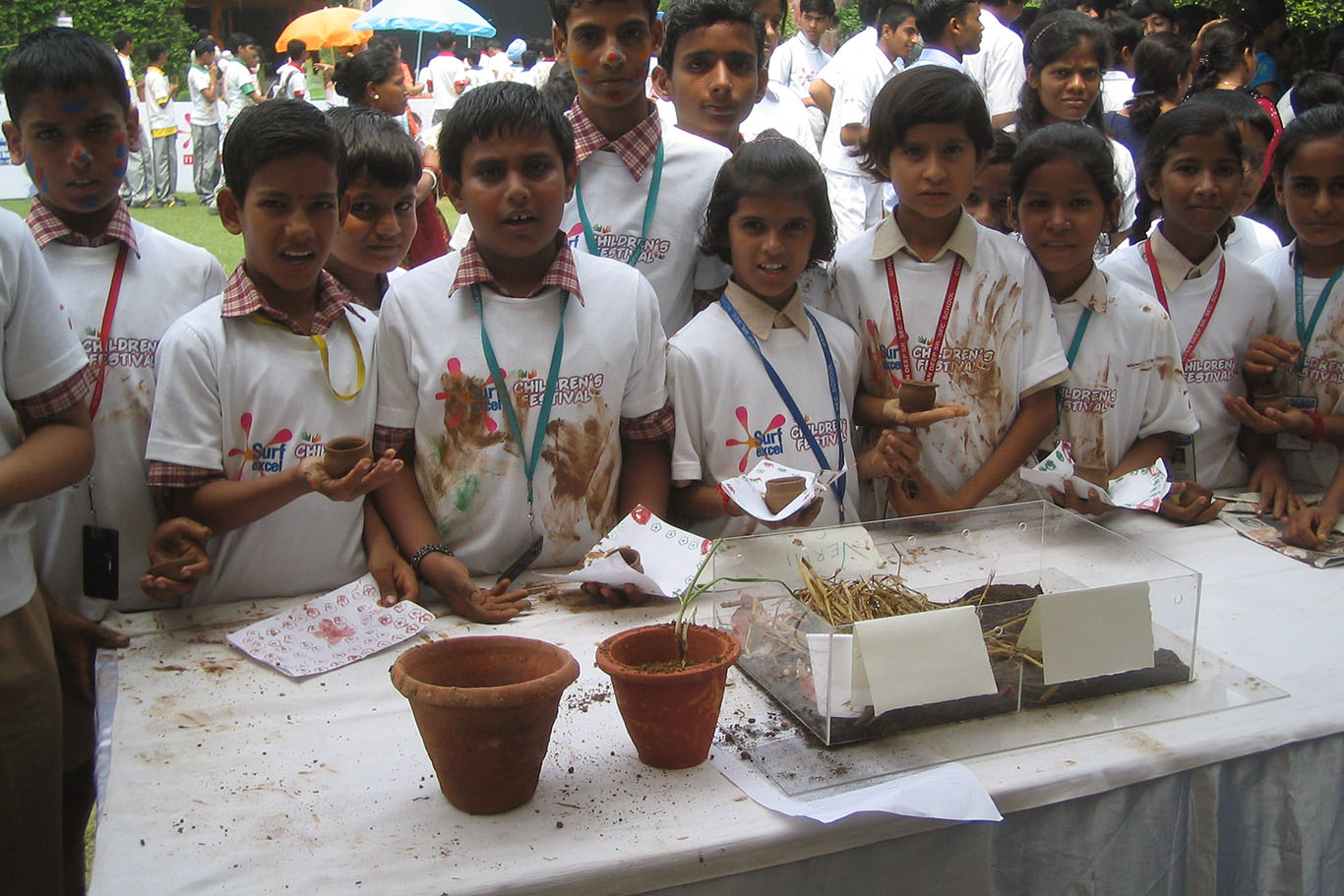 We conducted an environmental workshop during the children festival in collaboration with Surf Excel and The Times of India, at Delhi to give light to the creativity and artistic talents of the children. "Kuchh Daag achhe hain", this was the theme of the workshop during which we encouraged children to muddy their hands to get a feel of things natural. The highlights of the workshop were Pot making, planting saplings, Poster making etc. As some of the best things children learn are learnt out in the open, in the lap of nature, and not in the class rooms, we let the children realize their creativity by letting them be with pots, mud and plants. It was a pleasurable sight to see children from toddlers to teenagers enjoying planting their own saplings and carrying them away to care for them. Moreover, environmental games and painting added to their joy. Over 4000 children participated in the workshop. What was most pleasurable was to see children with special abilities taking active part in the workshop. Their million dollar smiles were the most motivating reward which we could have ever asked for. 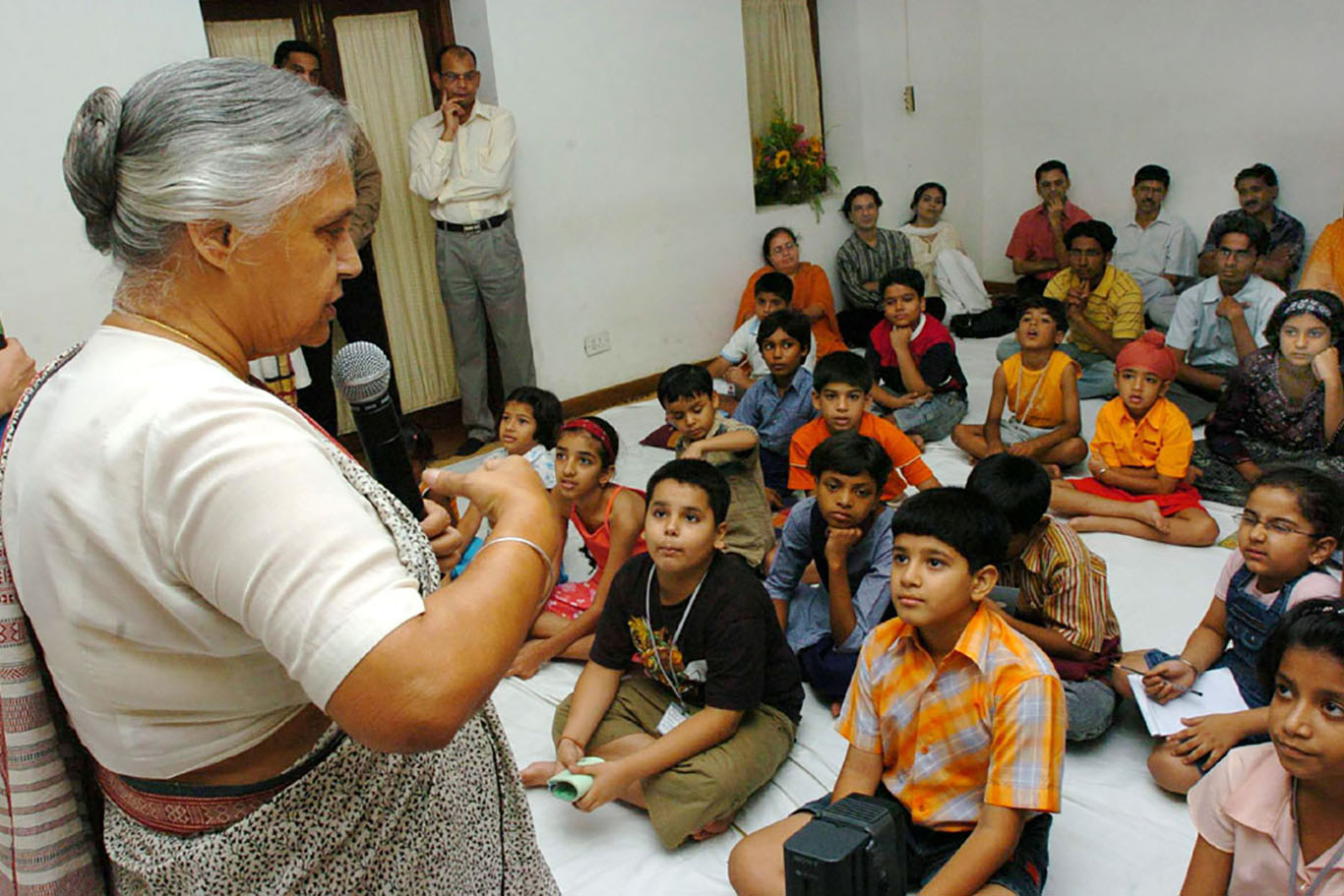 A nation can walk on the path of "Unnati" if people of all classes join hands and work together for the betterment of the Nation. Taking a leaf off the idea, DEEKSHA was associated with a unique workshop 'Unnati' which was organized by The Times Foundation at New Delhi involving children from different social and economic backgrounds. For this workshop, we contributed for the environmental education part involving all the children irrespective of their social and economic backgrounds. This initiative was a part of a summer camp where whole lot of activities like yoga, art and craft, plantation, dramatics were carried out with the theme 'Nature and Environment'. Through the various activities and being one with nature bridged the falsely created divide based on economic status between the children and within two days all of them became thick friends, mingled freely and became one cohesive group. As a famous quote goes – "If plants can grow together, why can’t human beings." During this workshop – they did! 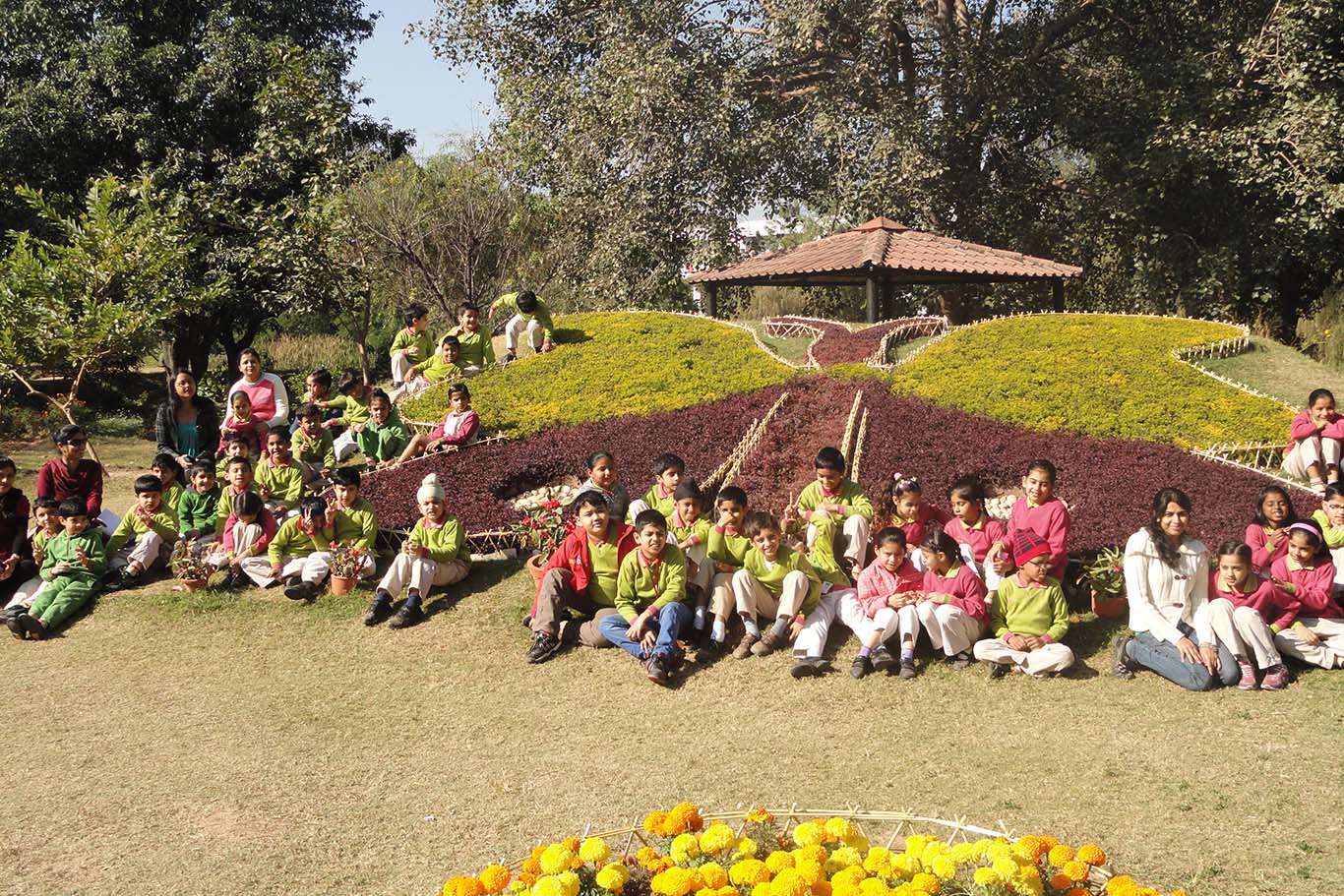 Saving the butterflies, they say, will save the ecosystem. DEEKSHA organized a series of Workshops and Field Excursions, at the Butterfly Park, Chandigarh, involving more than 2500 students drawn from the Schools, including Govt Schools, of Chandigarh with the theme “I am a Butterfly”. The workshops aimed to sensitize the school students about the Butterflies which are rare to spot these days. It included exciting ventures like field excursion to the Nature Trail and the Butterfly Conservatory. Interspersed with fascinating interpretive boards, the park gripped the attention of students and teachers alike. The immensely educative and recreational experience was enjoyed by all. In fact, it was an awesome experience for majority of the children as they were visiting a Butterfly Park and seeing butterflies in different stages of life from close quarters for the first time in their lives. 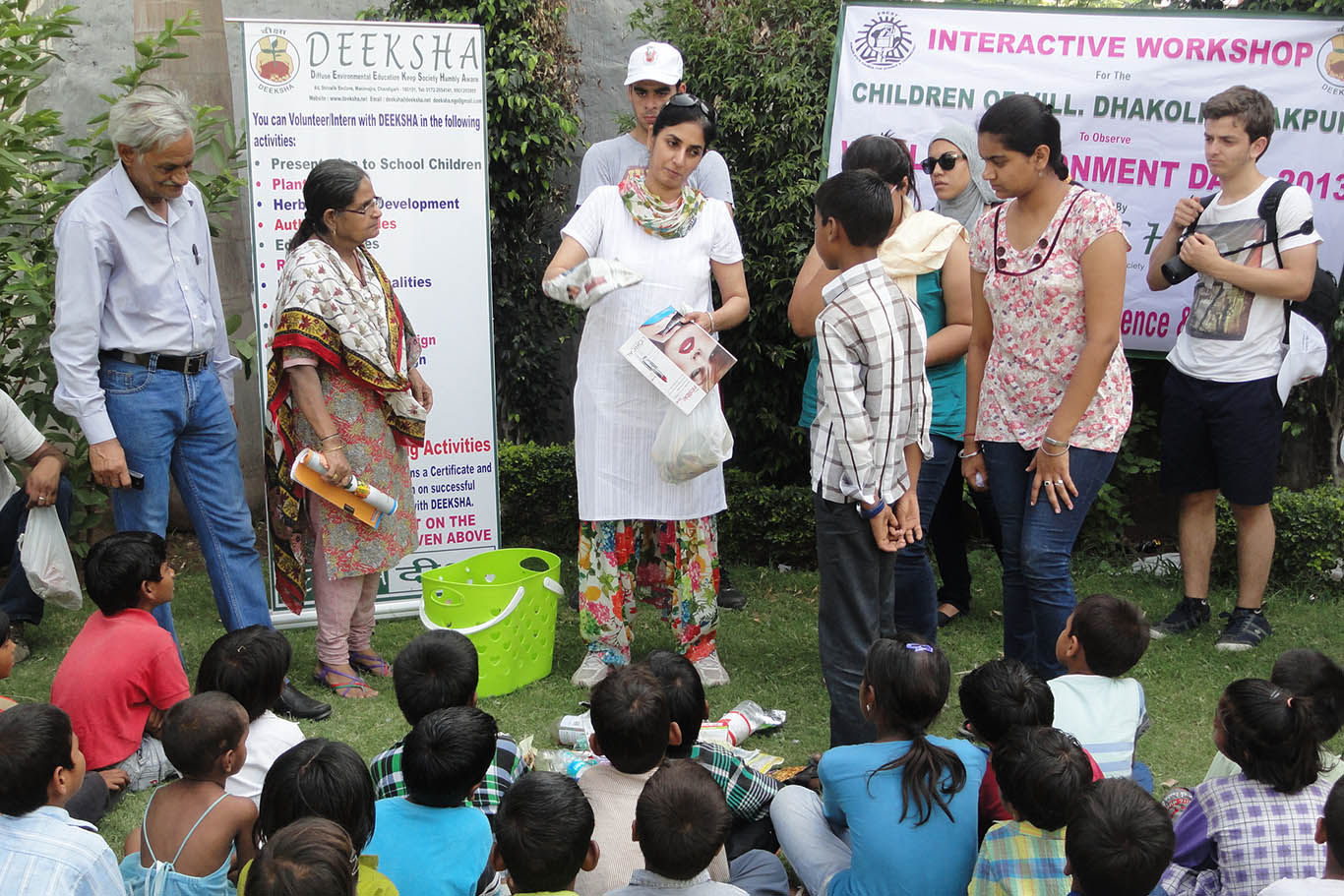 DEEKSHA conducted a fun based interactive workshop for the children of Jeevan Mukt Nishulk Vidyalaya of Village Dhakoli, Zirakpur. Children of age group ranging between 5-15 yrs got together and participated in a host of activities like environmental stories, games on waste management, planting of herbs followed by a drawing competition. The DEEKSHA team planned all the activities in a manner that the children learn importance of conserving natural resources while having fun. 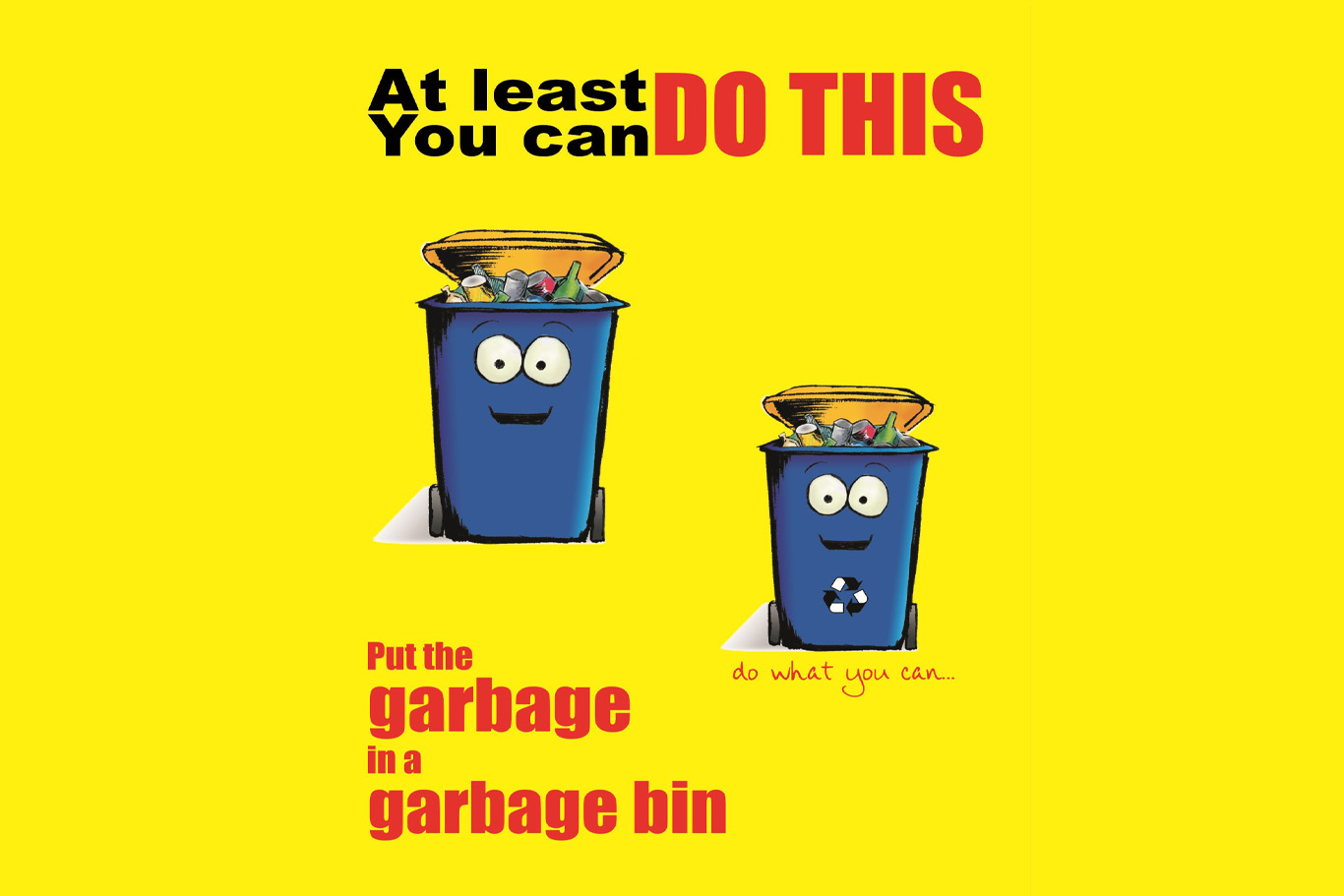 Publication of Posters and Literature

DEEKSHA has been regularly publishing posters, handbooks and reference hand-outs on various issues concerning the environment for use by schools and students. In order to compliment and sensitize the children on various environmental issues, DEEKSHA has been regularly conducting various activities such as debating, painting, poster making, quiz competitions and plantation drives in different regions of the country, including remote schools of Arunachal Pradesh and Andaman and Nicobar Islands. 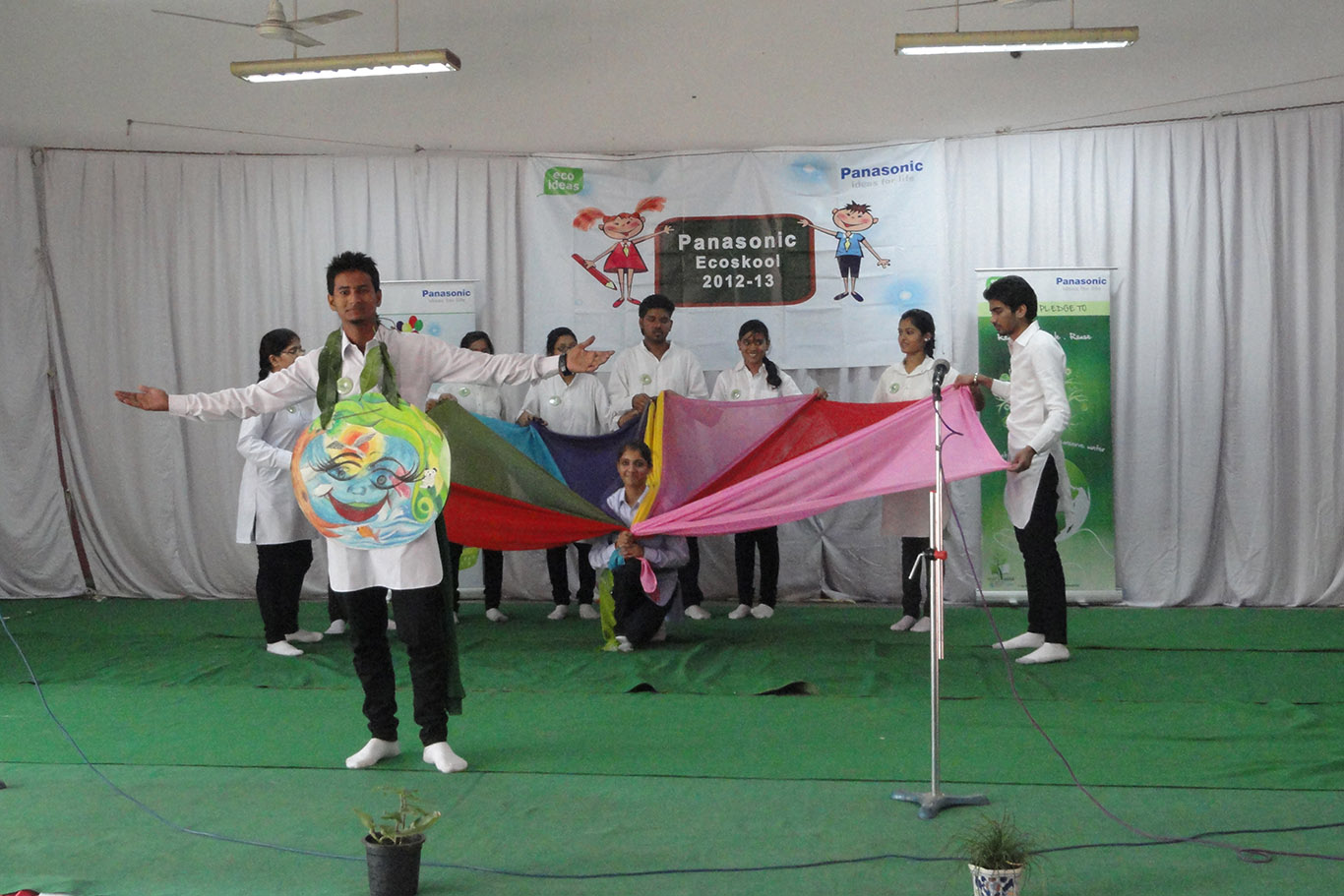 Students from Schools displayed their remarkable talent and sensitivity towards environmental challenges by performing during the Prithvi Vandana Environmental Theatre Festival organised by DEEKSHA supported by Panasonic. The theme of the environmental theatre festival was Global Warming & Climate Change. The event was packed with dynamic performances by school children with plays, musical dramas, Street Plays and Musicals. The students mesmerized the audience with their performances. 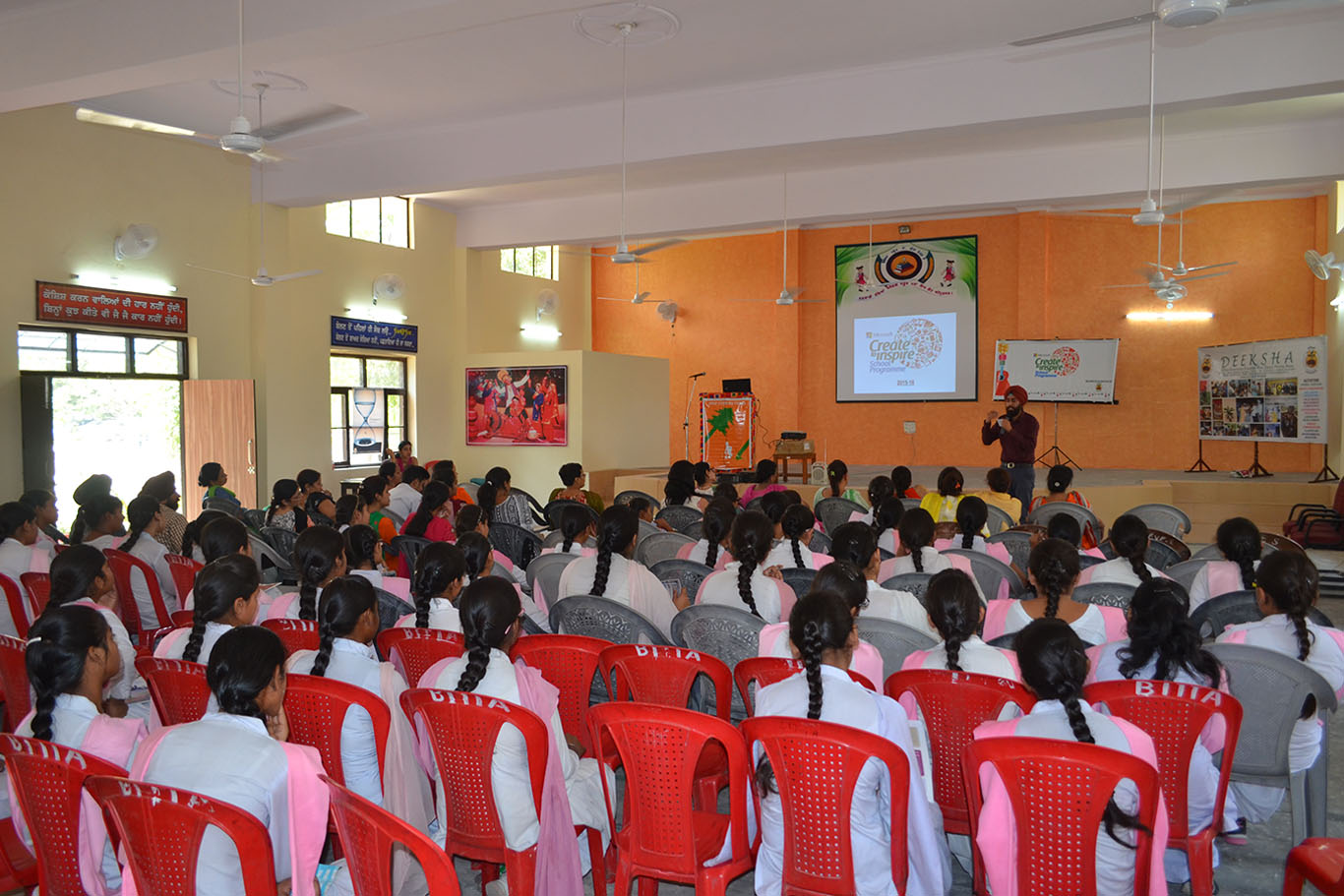 DEEKSHA in association with Microsoft conducted a project "The Microsoft Create to Inspire School Program" for 200 schools which was a thought leadership initiative for schools on environmentally sustainable living. Its aim was to enable development of 21st century skills amongst students including collaboration, critical thinking, creativity, communication, social skills, ICT competences, self-direction, and planning. The program aimed to build capacity of teachers from the participating schools, provide them with an advanced environmental curriculum mapped to existing subjects, and via them engage with students on environment. The program is an enabler for 'Swachh Bharat' and 'Smart Citizenship'. The deserving participants were suitably awarded. 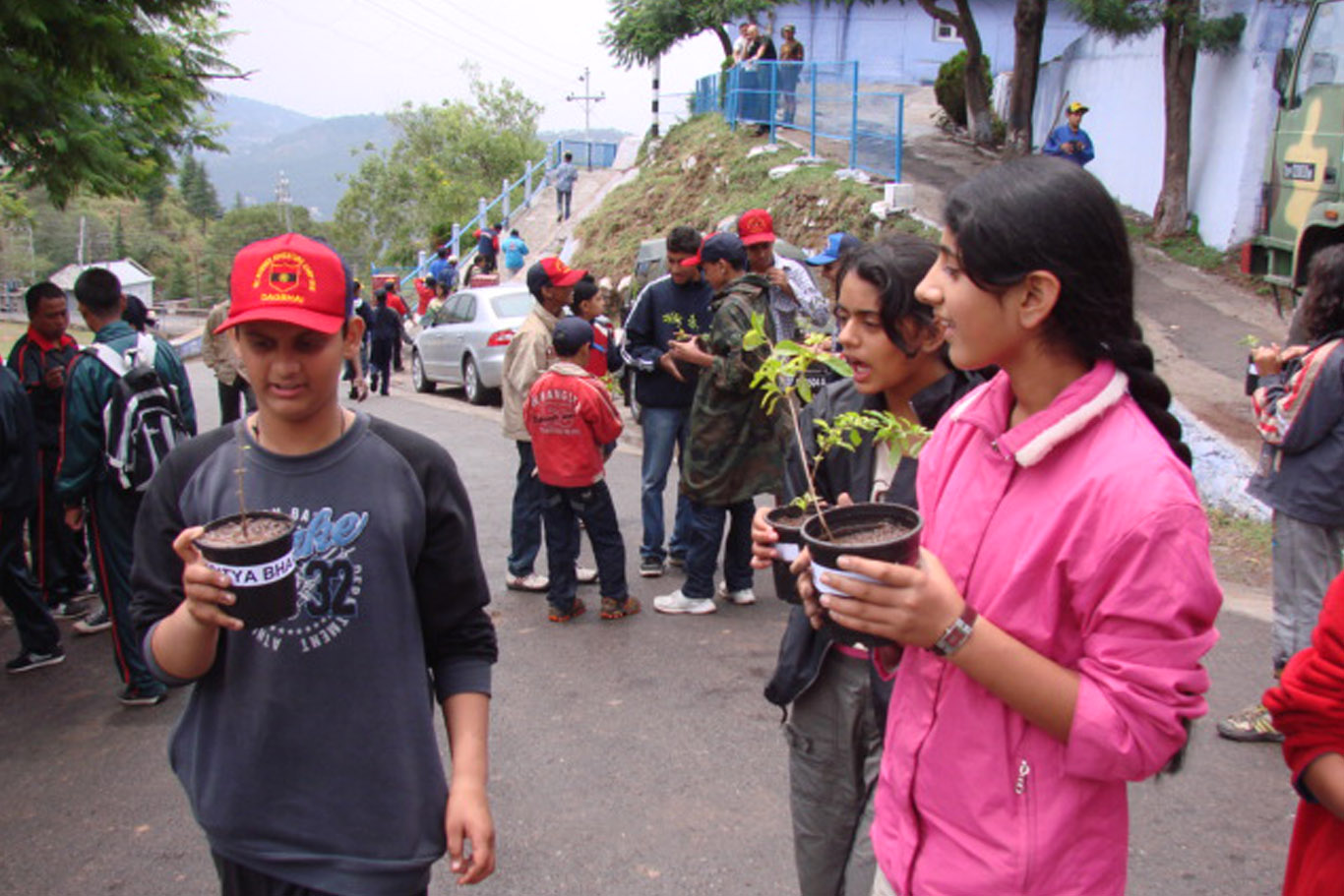 "DEEKSHA" conducted a workshop for school children on Nature and Environmental conservation. The workshop was conducted over two days as a part of the Army’s Western Command Summer Adventure Camp for children. It was a pleasure to see so many children from diverse backgrounds, cultures, regions, age and schools to amalgamate as a cohesive healthy group and perform various activities. The aim of the workshop was to inculcate environmental values amongst children and make them aware about the environmental hazards posed by the use of single use polythene besides letting the children understand nature in its true spirit. 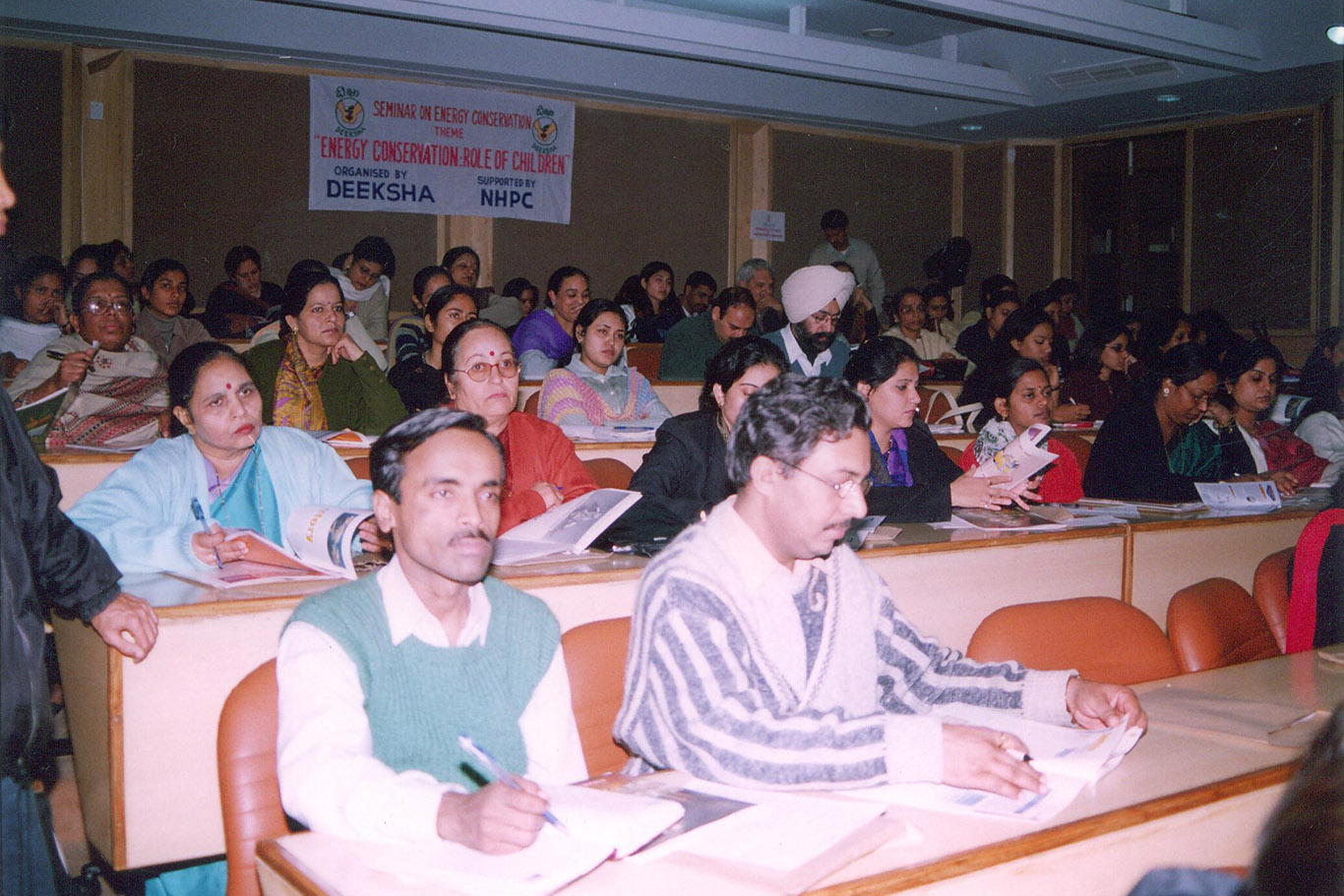 As we firmly believe that the society is moulded by the firm and caring hands and minds of the Gurus – Our Selfless Educationists – we have been regularly engaging with them on varied issues concerning the environment covering all its facets. We do believe, they carry the message to a very large community of students and are able to influence the thoughts and actions of their students commendably. We have carried out various teacher training programmes to empower them with tools and techniques which can be applied in their respective institutions. Some of the topics covered have been on Environmental Health, Water Conservation, Herbalism, Energy Conservation, E-waste management and so on. 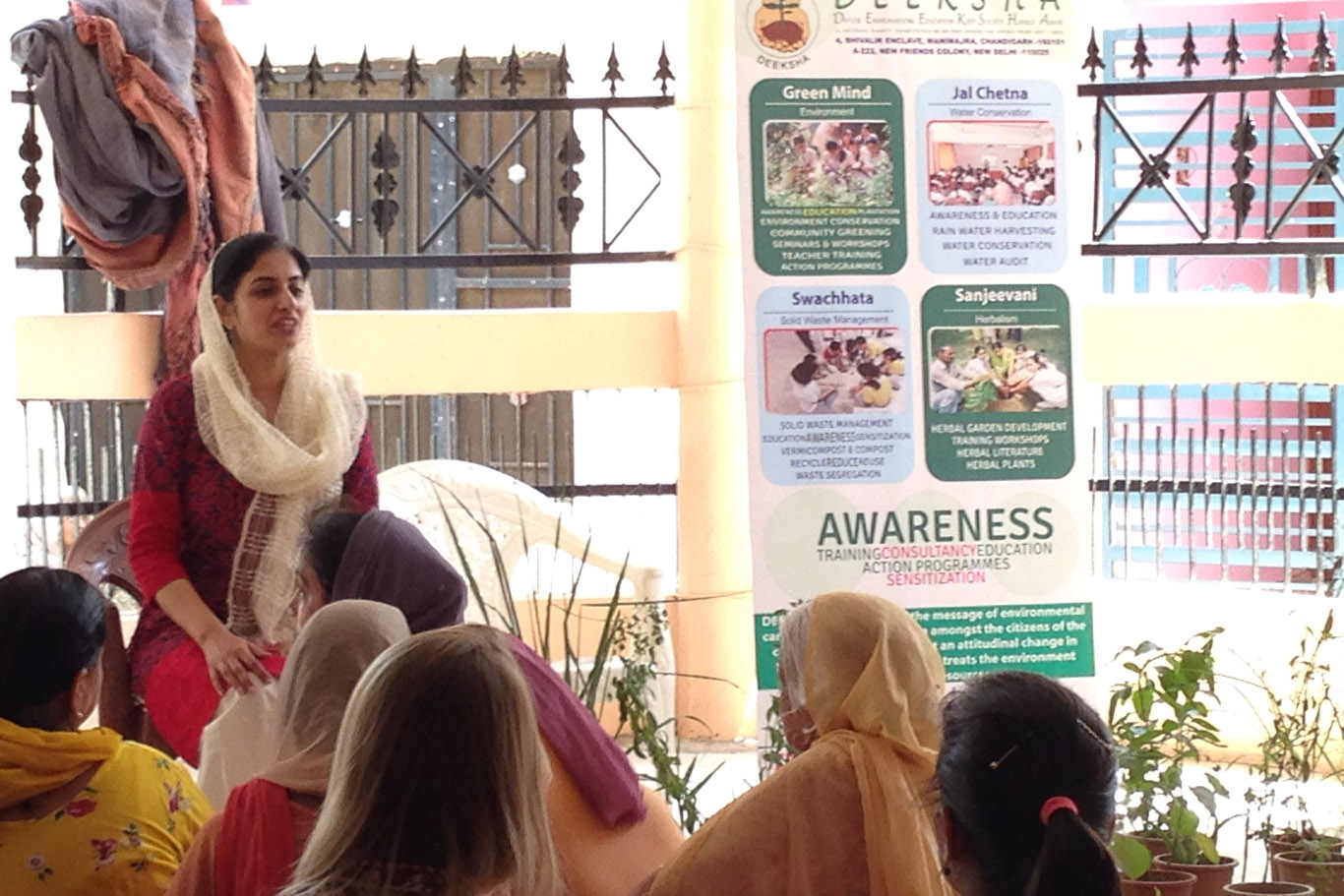 DEEKSHA has been promoting self help groups in solving a number of problems related to environmental conditions, solid waste management being the principle amongst them. Infact the self help groups have always been very supportive in solving certain environmental problems of the localities and have contributed very effectively to the better sanitary and cleaner conditions in the locality. "KUTTUMBAKAM" an all women self help group took birth due to this positive aspect of self help groups. Volunteers' further help in raising the awareness levels of the housewives about water conservation, solid waste management and environmental protection. The effort has received overwhelming response from all sections of the society. 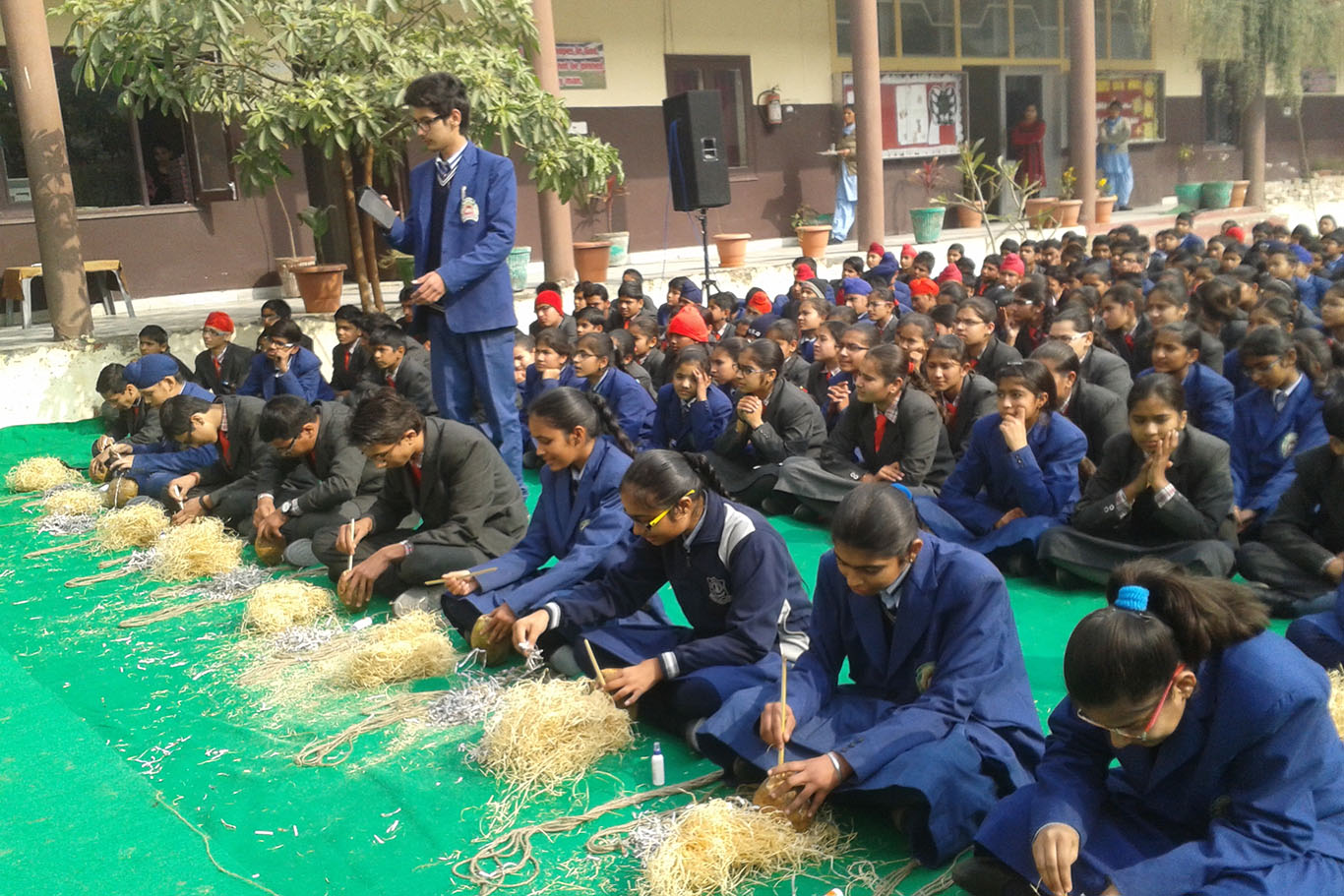 William Wordsworth, a poet and lover of nature, said, “Child is the Father of man.” A child is a mirror of his parent’s activities. Hence, we decided to handover the baton of environmental awareness in the hands of the children. Children have always played a vital, active and inspiring role in all the activities of DEEKSHA. Over the years, our teams have been visiting schools and educational institutions in various parts of the country and have held various training programmes and fun based activities on environmental conservation and all its facets for the children. 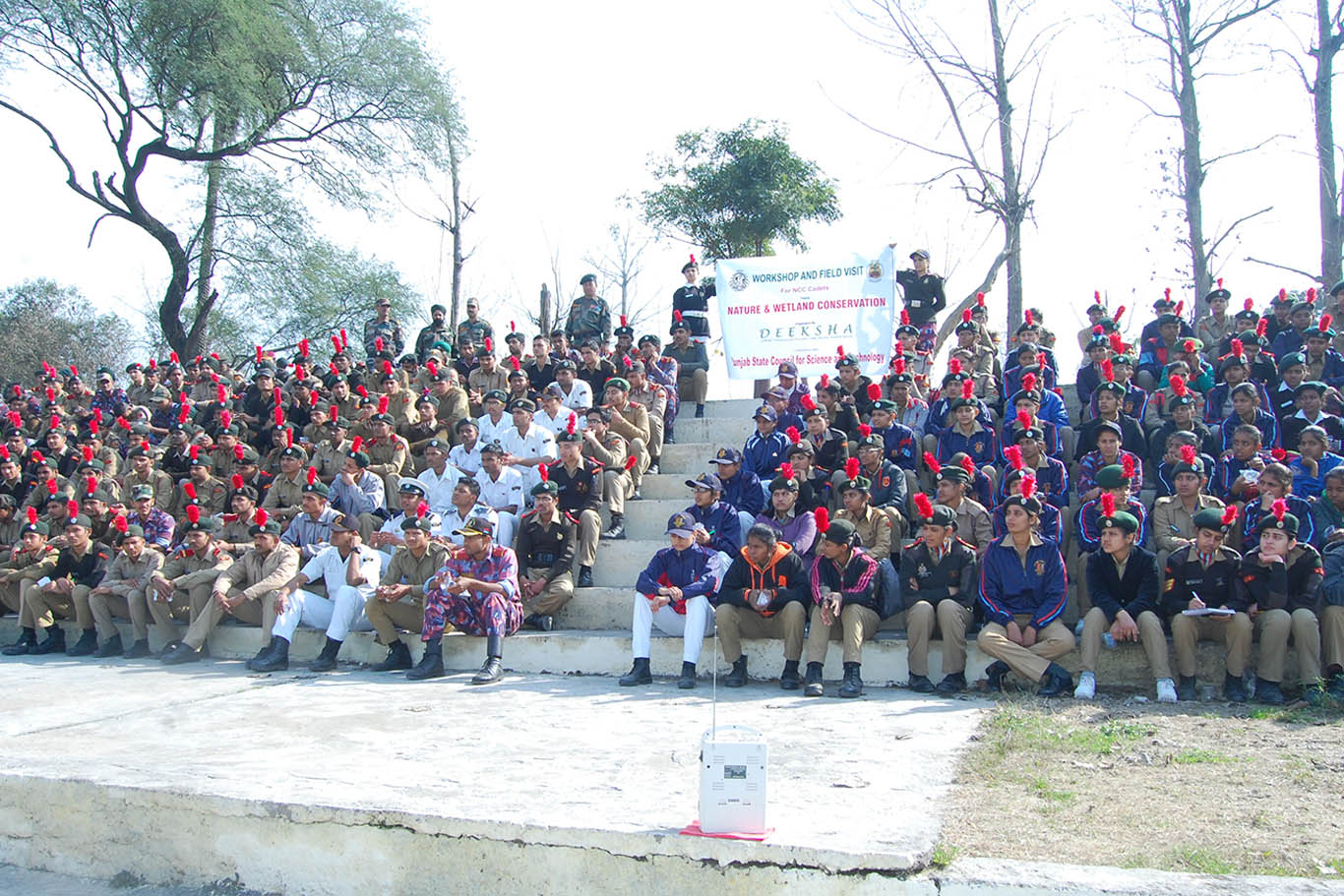 Wetlands are a very important part of the ecosystem and play a major role in conservation of biodiversity. DEEKSHA has been engaged in raising awareness about Biodiversity Conservation amongst the students by holding workshops and numerous field trips to various wetlands like Ropar, Harike, Sukhna etc. An important part of the event was education on migratory birds and removal of Water Hyacinth, a weed chocking our wetlands. 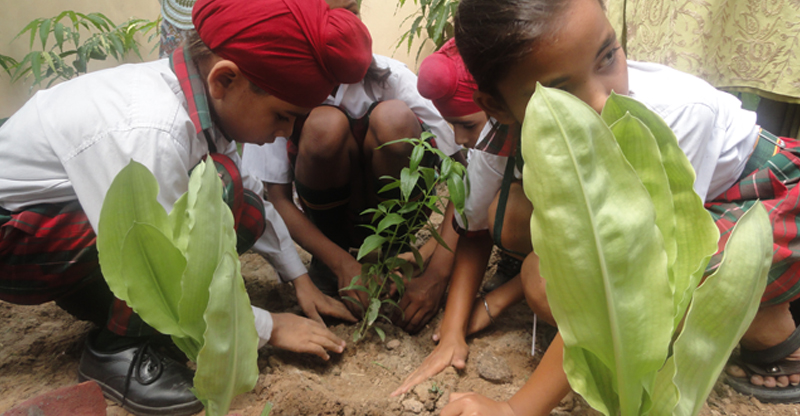 To increase the dwindling green cover in the country, we have till date planted approximately 1,35,600 trees including medicinal, fruit and ornamental varieties and the survival rate has been approximately 57%.